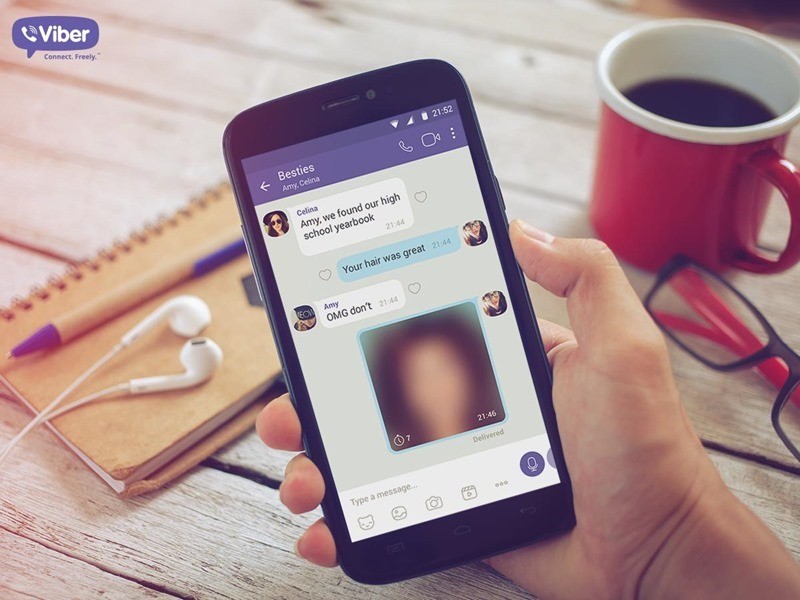 VIBER success is not only that it is a convenient communication tool, but also that it is updated regularly. Although it would seem, why should developers worry about it? Well, initially released high-quality and feature-rich application, well, enough. Many other messengers remain at the initial stage, and in some at all, that neither the update, it works worse and worse. And the most interesting thing is that users continue to use them instead of simply deleting and finding something more suitable. But, probably, it's not for nothing that Viber has become so popular, and the next improvements are the best proof of that. One significant update occurred in 2018, then the interface was revised. The developers found it necessary to slightly change it to make users more comfortable. At the same time, the speed of work also increased, so that the owners of low-end smartphone models could also use the instant messenger. And it brought positive results. But the developers did not stop there, and already in early 2019 pleased their customers with regular improvements. But let's consider it step by step.

In general, this element of the difficulties and did not arise earlier. Everything was quite comfortable, concise and simple. Viber mobile version completely met the modern requirements of users and did not cause any complaints. But now the interface has become even clearer, you can easily find the functions you need to reduce the time for sending messages or changing settings. Need to quickly find a chat button? No problem! The icon is located at the bottom of the screen. There are also frequently used icons such as “More” and “Calls”. But, it is worth getting used to the fact that the section in the settings menu now leaves not to the left, as before, but to the right. But this is a matter of time, literally after a couple of days of intensive use, you get used to this innovation. Also pleased with the main section of Viber, which lists group chats and contacts - it received a rich white color, which is visually more comfortable for the eyes. In addition, this innovation meets modern design standards. In general, today the trend in the field of information technology is such that usability, that is, the maximum convenience of users, comes to the fore. And this is understandable - if the user doesn’t like something, he simply goes to the competitor's application. And because serious companies carefully monitor behavioral factors. It is quite natural that the chat in Viber has also been updated. Calls are calls, but a huge part of the audience prefers to correspond, after all, this is an instant messenger. First of all, the dialog box has become wider, therefore, it can accommodate more text than before. Let not all write long messages, but sometimes it is useful. For example, when sending out advertising messages or for corporate needs. And in general, a perception has become better. As for the chat's background, it is automatically assumed white, supposedly it is the most convenient and unobtrusive. In general, it is. On a white background, it is easier to see the text. But if you want to make the background different, you just change it through the settings menu, you can also add a picture as a background. Viber update also affected the status of messages. How many times have you communicated with someone, but do not know if the other person received your message? And sit, wait, wondering if it was delivered, did the subscriber read it? It even caused some irritation, especially if it was necessary to quickly get an answer. Well, now this problem is solved. After updating the application, checkboxes appeared in the dialog boxes indicating the status of the message. If there is a check mark, the message has been sent, two black check marks indicate delivery. And when the interlocutor reads the message, the checkboxes are colored purple. However, do not worry, the application still has an incognito mode. Also updated Viber allows you to better see the sent pictures and videos. Before this, the image was automatically cropped, it turned out to be a square, and the whole picture could only be seen after opening. Now it appears in the dialog box in full quality and larger. In fact, you can not even open it at all. Bubbles. In fact, not every user uses them in correspondence. Smilies - yes, but babbly somehow do not survive. On the other hand, there are people who communicate with them only with their help. Instead of a dry “Hi”, you can send a bright and attractive bubble that conveys the sender's mood and causes positive emotions to the recipient. Well, isn't it lovely? It seems a trifle, but even this is thought up by the developers. This is a sad topic for many instant messengers. Some of them frankly slow down, others hang in case of poor communication, a number of other applications do not allow you to quickly send a message. But for Viber, such difficulties usually did not exist. However, the developers could not get past this point and decided that the update should touch the speed of work. As a result, messages began to be sent even faster than before, almost doubled! Similarly, one has to wait much less for an answer. In fact, chatting is obtained as close as possible to a “live” conversation. In just a few minutes, users can discuss interesting or important topics without losing precious time. At the same time, notifications about the delivery of messages are also not long in coming. Of course, the overall work of the messenger has accelerated. Again, for some, this is quite a critical moment, because there is not always free time to wait. Need to instantly send a message and go about your business? You just send it, and you can not worry about anything!

Personal security in the messenger

At the time of scammers activity on the Internet, the Viber team simply could not take in mind the care of the safety of their customers. In developing updates to this issue was given no less attention than all the rest. Now messages are encrypted with a special protocol, and unauthorized persons will not be able to access. Just as they will not be able to hack an account to obtain personal data of users. In addition, you can literally retire with someone from the members of the group chat. You just have to go to a private chat and that's it; you don’t even need to “blow” your phone number if you don’t want the other person to recognize it. This is very convenient for those who do not wish to disclose their phone numbers, for example, for owners or managers of large companies.

The results of the new Viber

These were the main points that affected Weiber. The developers promise to add more innovations in the near future. In particular, it announces a group video call, in other words, a video conference. There are no dates yet, and it is not known when to expect this function. But the team is already actively working on it, trying to make Viber perfect from all points of view by the instant messenger. And we will wait for the next update to fully enjoy the quality of communication.